2020-12-17
NOAA has published its 15th Arctic Report Card, which catalogs the numerous ways that climate change continues to disrupt the polar region, with 2020 seeing the second-highest air temperatures and second-lowest summer sea ice driving a cascade of impacts, including the loss of snow and extraordinary wildfires in northern Russia.
The Arctic Report Card is an annual compilation of original, peer-reviewed environmental observations and analyses of a region undergoing rapid and dramatic alterations to weather, climate, oceanic and land conditions. Compiled by 133 scientists from 15 countries, the 2020 report card tracks environmental indicators to inform decisions by local, state and federal leaders confronting a rapidly changing climate and ecosystems.
“For 15 years, the Arctic Report Card has helped NOAA fulfill its mission of providing the scientific information our nation needs to better understand how climate change is affecting the Arctic and weather around the globe,” said retired Navy Rear Adm. Timothy Gallaudet, PhD, deputy undersecretary of commerce for oceans and atmosphere at NOAA. “Our ability to meet the challenges and opportunities of an Arctic region in transition depends on how well we can observe and predict the pace and scale of these changes.”

The age of sea ice in the Arctic at winter maximum in 2000 (left, week of March 18) and 2020 (right, week of March 21). Ice older than five years (white) is very rare today; only a small ribbon remains along the islands of the Canadian Arctic. Age is a stand-in for ice thickness and durability; young ice is thinner and more likely to melt in the summer. NOAA Climate.gov map, based on data from the National Snow and Ice Data Center.
The Arctic Report Card is organized into three sections: Vital Signs provides annual updates on seven topics: surface air temperature; terrestrial snow cover; Greenland ice sheet; sea ice; sea surface temperature; Arctic Ocean primary productivity; and tundra greenness. Other Indicators explores topics that are updated periodically. Frostbites reports on new and emerging issues, and topics that relate to long-term scientific observations in the Arctic. 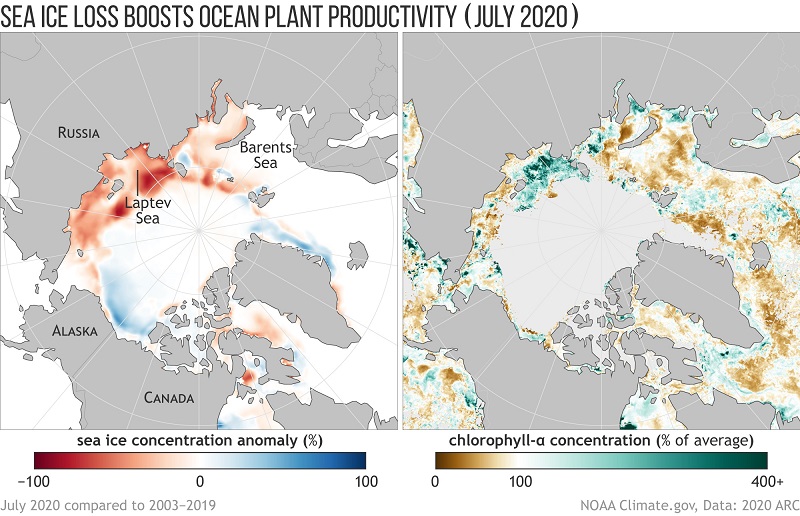 (Left) Sea ice concentration in July 2020 compared to the 2003–2019 average. Red areas had up to 100% less than their average sea ice, while blue regions had up to 100% more ice than average. (Right) Chlorophyll amounts – an indicator of ocean plant productivity – in July 2020 as a percent of the 2003–2019 average. Very low sea ice in the Laptev Sea in July was linked to much higher than average phytoplankton productivity (deep green). NOAA Climate.gov map by Mary Lindsey, adapted from the 2020 Arctic Report Card, based on data provided by Karen Frey
Some of this year’s significant findings include:
* The average annual land-surface air temperature in the Arctic measured between October 2019 and September 2020 was the second warmest since record-keeping began in 1900 and was responsible for driving a cascade of impacts across Arctic ecosystems during the year. Nine of the past 10 years saw air temperatures at least 1°C (2.2°F) above the 1981-2010 mean. Arctic temperatures for the past six years have all exceeded previous records.
* Extremely high temperatures across Siberia during spring 2020 resulted in the lowest June snow extent across the Eurasian Arctic observed in the past 54 years.
* The 2020 Arctic minimum sea ice extent reached in September was the second lowest in the satellite record. Overall thickness of the sea ice cover is also decreasing as Arctic ice has transformed from an older, thicker and stronger ice mass to a younger, thinner more fragile ice mass in the past decade.
* The MOSAiC Expedition, the year-long expedition based from the Polarstern icebreaker in the central Arctic Ocean, drifted much faster than anticipated through thinner ice than expected, experiencing sea ice dynamics that complicated the scientific mission.
* Extreme wildfires in the Sakha Republic of northern Russia during 2020 coincided with unparalleled warm air temperatures and record snow loss in the region.
Pacific Arctic bowhead whales have rebounded in the past 30 years, due to increases in both local plankton blooms and transport of increased krill and other food sources northward through the Bering Strait, a signal of long-term warming in the Arctic Ocean.
“Taken as a whole, the story is unambiguous,” said Rick Thoman, Alaska climate specialist with the International Arctic Research Center, and one of three editors of this year’s report card. “The transformation of the Arctic to a warmer, less frozen and biologically changed region is well underway.” 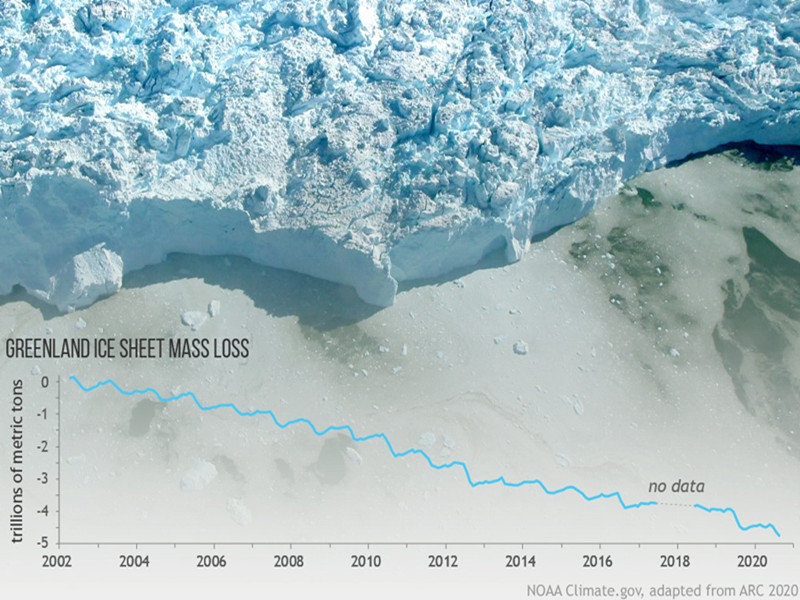 The Greenland Ice Sheet lost mass again in 2020, but not as much as it did 2019. Adapted from the 2020 Arctic Report Card, this graph tracks Greenland mass loss measured by NASA’s GRACE satellite missions since 2002. The background photo shows a glacier calving front in western Greenland, captured from an airplane during a NASA Operation IceBridge field campaign