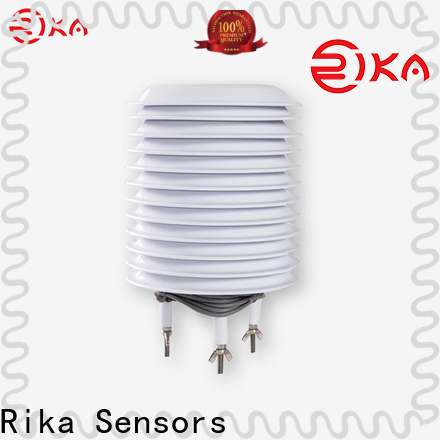 Company Features
1. The strong R&D team is a power to promote our growth. They all have excellent educational backgrounds. With knowledge and deep industry know-how, they are always able to offer customers satisfying product solutions.
2.  The decisive determination of Rika Sensors is to supply the best customer service. Welcome to visit our factory!

The Multi-Plate Radiation Shield protects temperature,relative humidity or barometric pressure sensors from error-producing solar radiation and precipitation. This shield relies on a combination of plate geometry, material and natural ventilation to provide effective shielding. The radiation shield reflect sunlight from any direction, prevent sun direct radiation and reflection on the ground to the sensor radiation, to protect the instrument from the effects of strong winds, rain, snow, etc.Freely through the air, making instrument work in ventilated environment, to ensure the accuracy of measured data.Products with high reflectivity and low thermal conductivity, resistance to ultraviolet ray function, can be used in extreme weather conditions.The product with breathing fan, make sure the screen inside and outside environment difference is minimal. Compact size for easy use